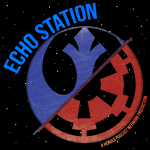 Put on your roleplaying hats because Kris and Ian are creating their own NPC’s in the Star Wars universe! The crew of Echo Station have decided to cast themselves in the Star Wars universe, including what species they would be, the occupation they would hold, weapons their character would use and so much more. After they pitch their own characters they then try their luck with a random NPC Star Wars generator. So grab those six sided dice and make the jump to hyperspace with us!

How We Experience Games