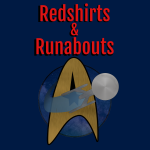 We return to our TNG Mek’ba series as we enter Season 3 of The Next Generation. This week, we are joined by returning guest Zach for the Best Guest Appearance of TNG Season 3. Zach picked the introduction to Barclay who would go on to guest star on Voyager and even the First Contact film. Derreck picked the return of Spock’s father, Sarek, in the episode of the same name. Greg must decide which episode is the Best Guest Appearance of TNG Season 3! But first, we have a lovely conversation about two fantastic episodes.

At the beginning of the episode, we also talk a bit about Star Trek merchandise including the expensive Picard computer and the first spotting of the new Kirk & Picard action figures!

Be sure to check out @RedshirtsPod on Twitter after listening to this episode so you can vote in the poll before it closes and make your opinion heard!

What do you think of our two episodes? Which one is the best guest appearance of TNG Season 3? Do you think there is a better episode we missed? What are some future topics you’d like us to have in our Mek’ba for future TNG seasons and other Trek series?